[ecis2016.org] The Bombay HC has directed a private developer to inform it about the preventive steps it was going to take, to ensure that its under-construction high-rise in south Mumbai did not damage adjoining buildings, including the bungalow of jurist Soli Sorabjee

A Bombay High Court bench of justices AS Oka and RI Chagla, on March 28, 2018, asked developer Rohan Lifespaces, to list preventive steps it was going to take, to ensure that its under-construction high-rise in south Mumbai did not damage adjoining buildings and ensure there was no danger to the residents and passersby in the area, due to falling debris or repair material being used for the high-rise. The directions came after jurist Soli Sorabjee’s lawyers Nikhil Sakhardande and Prahlad Paranjpe, informed the bench that despite its intervention on a previous occasion, the realtor had failed to ensure other residents were not inconvenienced.

In the court, the lawyers showed a slab of cement which they claimed had fallen inside the premises of Sorabjee’s bungalow on Napean Sea Road in south Mumbai. “This is so dangerous. What is this callous behaviour? What if this slab had fallen on some passerby’s head and caused serious injuries,” the bench asked. It said the work should have been stayed by the Brihanmumbai Municipal Corporation (BMC), until it had ensured that all safety precautions had been taken.

“Give an undertaking to this court, stating what precautions will you take and which safety measures will you implement, to ensure that no damage is caused to neighbouring buildings and the petitioner’s property and to the lives of other residents,” the bench said. The judges granted the real estate company time till April 3, 2018, to submit such an undertaking.

On March 1, 2018, Sorabjee, a former attorney general of India, had approached the HC, alleging the BMC had failed to take action on his complaint about construction debris from a high-rise next to his house. “Construction debris, cement slabs, plaster, steel rods, etc., keep falling from the building site onto the road and inside the premises of the nearby buildings,” Sorabjee had alleged in his plea. This also posed a danger to his family, as well as to passersby, he had said in the petition.

The BMC in the latest hearing, submitted a reply in the court, stating that on March 12, it had conducted a site visit. It said the developer had installed a safety net to ensure no debris or repair material fell on the roads or within the premises of neighbouring buildings. The corporation also submitted it had directed the realty firm to implement all requisite safety procedures and arrangements. The developer, meanwhile, told the HC it would henceforth ensure no residents or passersby were inconvenienced. The company said the high-rise was being re-plastered currently and its construction would be completed within nine months. The 32-storey building is coming up on a plot adjacent to Sorabjee’s bungalow. 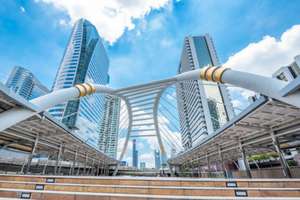 Madras HC declines to vacate its order on land issue