[ecis2016.org] The Supreme Court has told real estate firm Parsvnath Developers that its officials would be held liable for contempt, if cheques handed over by it to union minister Rajyavardan Singh Rathore, are dishonoured

A Supreme Court bench, comprising chief justice Dipak Misra and justices AM Khanwilkar and DY Chandrachud, on September 4, 2017, warned Parsvnath Developers that if the cheques given to union minister Rajyavardan Singh Rathore were not honoured within the given time frame, its officials would be held liable for contempt.

You are reading: Row over Rathore’s flat: SC warns Parsvnath about cheques being dishonoured

“We direct that the cheques given to the appellant (Rathore) shall be honoured within the time frame, failing which, all those responsible for the company will be held liable for contempt,” the bench said. However, the developer assured the bench that the cheques would be honoured on time. The court then disposed of Rathore’s plea, with a liberty that he could revive the matter by filing an application, if the cheques were not honoured.

The apex court was told that Rathore had refused to take possession of the flat he had booked in Parsvnath Developers’s Exotica project in Gurugram as it was uninhabitable and the builder had handed him post-dated cheques to return the money. It was told that Rathore and the builder had arrived at a settlement, as per which the developer had given five post-dated cheques, in addition to some amount already paid to him.

Rathore had earlier termed the flat given to him by the developer as uninhabitable, pointing out several deficiencies. Thereafter, a two-member panel of lawyers was appointed by the court, to look into Rathore’s allegations that the flat given to him by the developer was uninhabitable. The apex court had, on December 14, 2016, asked Rathore to sit with the representatives of the builder and settle the dispute amicably. It had also asked the realty firm to remove deficiencies in the flat as pointed out by Rathore and the court-appointed panel that had visited the site and hand it over to the minister.

Rathore had booked the flat in 2006, by paying around Rs 70 lakhs for it. The firm had promised to deliver the flat in 2008-09. The apex court had, on October 21, 2016, directed Parsvnath Developers to hand over possession of the flat to Rathore in two days, saying he should not pay any additional amount to the builder. 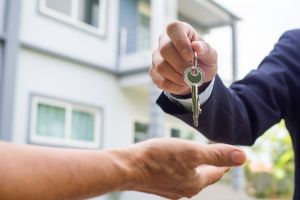