[ecis2016.org] Improvement in access to housing has been disproportionately greater for the LIG segment, as compared to the HIG segment, shows the survey

The government’s Economic Survey 2021 shows that there has been a marked improvement in access to quality housing in India, especially for the people belonging to the low income group (LIG) segment. Citing trends from the National Housing Index, the survey, presented by finance minister Nirmala Sitharaman, on January 29, 2021, ahead of the Union Budget on February 1, however, noted that the improvement in access to housing had been disproportionately better for the low income group (LIG), as compared to the high income group (HIG) segment, thereby, enhancing equity in access to housing in 2018, vis-à-vis 2012.

You are reading: Access to quality housing in India has improved: Economic Survey 2020-21

To measure the progress in the delivery of the basic necessities such as housing, water, sanitation, electricity and clean cooking fuel, the Economic Survey 2020-21 also introduced a ‘Bare Necessities Index (BNI)’ across states.

“In order to improve access to ‘the bare necessities’, successive governments have made constant efforts. The network of schemes designed to deliver these necessities, include inter-alia the Swachh Bharat Mission (SBM), the National Rural Drinking Water Programme (NRDWP), the Pradhan Mantri Awas Yojana (PMAY) and the Saubhagya and Ujjwala Yojana,” it said. “These schemes were equipped with new features, such as the use of technology, real-time monitoring, geo-tagging of assets, social audit, embedded digital flow of information and direct benefit transfers, wherever possible,” the survey added.

The survey also noted that there had been improvements across various dimensions, as reflected by the BNI.

Drinking water: According to the survey, for example, access to drinking water to households in most of the states improved in 2018, compared to 2012, in rural, as well as urban areas.

Housing: According to the survey, the improvement in the Housing Index also indicated improvement in access to housing and reduction in inter-state disparities, with disproportionate benefits for the lowest income group in 2018, vis-à-vis 2012.

Micro-environment: The Economic Survey also noted improvement in the micro-environment for all states in 2018, except for Assam in rural areas and Odisha and Assam in urban areas, as compared to 2012. Here also the improvement was especially in the lowest income quintile.

Other facilities: The survey also noted improvements in access to other facilities, such as the availability of kitchens, kitchens with water taps, good ventilation in houses, access to bathrooms, electricity use and type of fuel used for cooking.

Citing the World Bank numbers, the survey said that in spite of an improvement in India’s regulatory quality since 2013, its position was much lower than the UK, the US, Singapore, Japan, etc., on the Ease of Doing Business Index. The World Bank’s Ease of Doing Business report 2020 also showed that despite making huge strides in the overall rank, India still lagged behind, in the sub-categories ‘Starting a business’ and ‘Registering Property’, where the country was ranked 136 and 154, respectively. The report pointed out that this was due to the high number of procedures required to legally start and formally operate a company, as well as the time and cost consumed to complete each procedure.

The survey also projected that the economy was likely to grow by a robust 11% in FY22 on the back of the roll-out of a massive vaccination drive. The government has started its inoculation drive with two vaccines, Serum Institute of India’s Covishield, licensed from Oxford University and AstraZeneca and the locally-developed Covaxin that is being produced by Bharat Biotech and the Indian Council of Medical Research.

“The foresight of our collective vision to battle this pandemic became evident, when policy insights and implementation at the centre, state and local levels converged, to initiate a V-shaped economic recovery. After experiencing a sharp contraction of 23.9% in the first quarter of 2020-21, India is expected to be the fastest-growing economy in the next two years. Projections by various national and international agencies, including the IMF, project this resilience of the Indian economy,” the survey, authored by chief economic adviser Krishnamurthy V Subramanian, said. 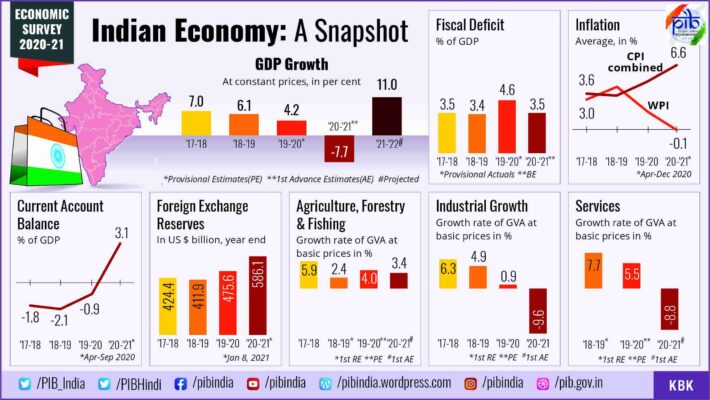 The monetary policy was significantly eased from March 2020 onwards, owing to the unprecedented COVID-19 pandemic and remained accommodative in 2020. The survey observed that the repo rate had been cut by 115 basis points (bps) since March 2020, with a 75-bps cut in first Monetary Policy Committee (MPC) meeting in March 2020 and a 40-bps cut in the second meeting in May 2020. This survey also noted that the year saw improvement in transmission of policy rates to deposit and lending rates, as reflected in a decline of 94 bps and 67 bps in the weighted average lending rate on fresh rupee loans and outstanding rupee loans, respectively, from March 2020 to November 2020. Similarly, the weighted average domestic term deposit rate declined by 81 bps during the same period.

Real estate out of its first-quarter trough

While stating that India would witness a V-shaped recovery, the survey also pointed out that the real estate sector was out of the difficulties it had to face during the first quarter of FY21, at a time when India imposed a strict lockdown to contain the spread of the Coronavirus.

“During high uncertainty, policy should minimise large losses. India’s policy response to COVID-19, was guided by the realisation that the GDP growth would come back but not lost human lives. The early intense lockdown saved lives and helped faster recovery,” Subramanian said in his post-event press meet, adding that the lockdown had a causal effect on saving lives and livelihoods.

Data available with ecis2016.org show only 19,038 units were sold during April-June in 2020, a period which witnessed strict travel restrictions across various parts of the country to tame the spread of the virus.

The Economic Survey 2019-20 has pegged India’s GDP at 5% for FY20 and at 6%-6.5% in FY21 and said that the fiscal deficit target for the current fiscal may need to be relaxed, to revive growth

Weak global growth impacting India, as well as an investment slowdown due to financial sector issues, had led to growth dropping to a decade low in the current fiscal, it said, adding that the 5% growth projected for 2019-20 is the lowest it could fall for now. Growth slipped to 4.5% in the July-September quarter.

The pre-budget survey said for wealth to be distributed, it first has to be created and called for looking at wealth creators with respect. The Survey said government interventions seem to be ineffective in stabilising prices of commodities such as onions. For boosting growth, it called for new ideas for manufacturing such as ‘assemble in India for the world’ which will create jobs.

To further make it easier to do business, the Survey called for removing the red tape at ports to promote exports, as well as measures for easing the start of business, register property, pay taxes and enforcing contracts.

Real estate developers, says the Survey, would have to allow prices to fall in order to deal with the unsold housing stock. The Survey estimates that India’s eight top residential markets had nearly 9.43 lakh units, worth Rs 7.77 lakh crores, with 41 months of inventory overhang at the end of 2018. Amid muted demand, prices have been appreciating even if marginally, the Survey points out.

It also called for improving governance in public sector banks and the need for more disclosure of information to build trust. It also talks about dwarfism in the banking sector. Economic Survey advocates 10 new ideas that benefit markets as well as the economy. The Survey this year has been printed in lavender colour – the same as the colour of the new 100 rupee currency note, the oldest currency note in circulation in the country. 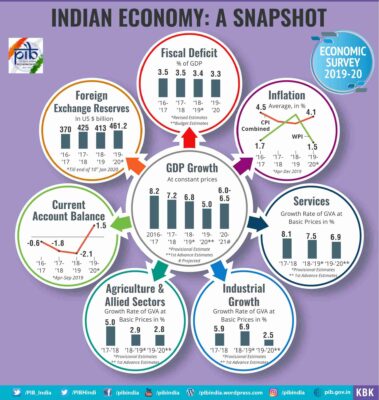 The Economic Survey 2018-19, tabled in the parliament before the union budget, pegged India as the fastest-growing major economy in the world, with a GDP of 7% for FY20 and retained the fiscal deficit projection at 3.4%

“India’s growth of real GDP has been high, with average growth of 7.5% in the last five years (2014-15 onwards). The economy grew at 6.8% in 2018-19, thereby, experiencing some moderation in growth when compared to the previous year,” it said. This moderation in growth momentum is mainly on account of lower growth in agriculture, trade, transport, communication and services related to broadcasting among others, it said.

During the last five years, India’s economy has performed well, it said, adding that the government has ensured that the benefits of growth and macroeconomic stability reach the bottom of the pyramid by opening up several pathways for trickle-down. “To achieve the objective of becoming a USD 5-trillion economy by 2024-25, as laid down by the prime minister, India needs to sustain a real GDP growth rate of 8%,” it said.

“The growth in the economy is expected to pick up in 2019-20, as macroeconomic conditions continue to be stable, while structural reforms initiated in the previous few years are continuing on course. However, both downside risks and upside prospects persist in 2019-20,” it said. The survey, meanwhile, retained the fiscal deficit at 3.4% of the GDP for the current fiscal, the same as projected in the revised estimate of the interim budget 2019-20. However, general fiscal deficit – centre and states combined – has been pegged at 5.8% in 2018-19, down from 6.4% in the previous fiscal. 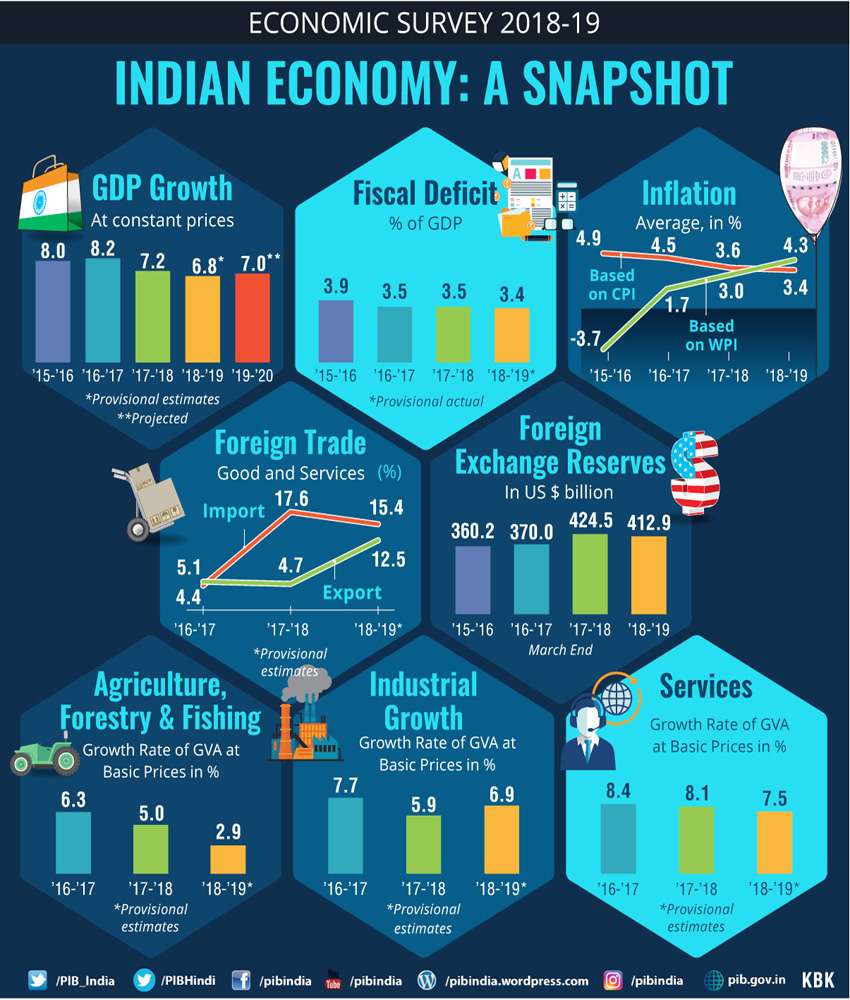 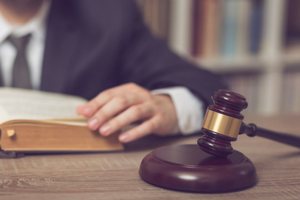 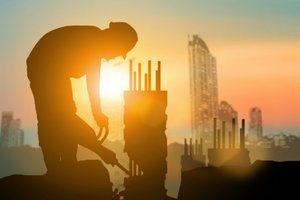 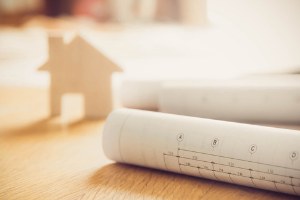