[ecis2016.org] Observing that environment cannot be massacred in name of development, the Bombay High Court today asked the Mumbai Metro Rail Corporation to prove it did not damage a children park while executing its Line III project

A Bombay High Court bench of chief justice Manjula Chellur and justice GS Kulkarni, has ordered the Mumbai Metro Rail Corporation Ltd (MMRCL) to prove that it did not damage a children’s park, while executing the Seepz-Colaba Metro Line III project.

You are reading: Environment can’t be massacred for development: HC to Mumbai Metro

The court gave this order, while hearing the pleas of Churchgate and Cuffe Parade residents of south Mumbai, challenging the proposed felling of over 5,000 trees for the project. The high court had earlier directed the MMRCL not to cut any tree till further orders.

Advocates Iqbal Chagla and Janak Dwarkadas, the counsel for the petitioners, told the court that the MMRCL had destroyed a children’s park in Cuffe Parade for digging work, despite the Ministry of Environment and Forest (MoEF) refusing permission to them to carry out any work there, since the area falls under the Coastal Regulation Zone (CRZ).

Advocate Kiran Bagaria, appearing for the MMRCL, told the court that the park has not been damaged and that no work is being carried out in the park as part of the project. The court said the MMRCL will have to submit all documents, including its proposals and resolution of meetings, to substantiate its claim.

“We understand that the metro project is of utmost importance as it will ease the common man’s woes but the MMRCL cannot massacre the environment in the name of development. There should not be callousness and recklessness in damaging something that cannot be restored,” chief justice Chellur said.

The court directed the MMRDA and MMRCL to submit all the documents on April 24, 2017, when it will hear the petition. The Line III Colaba-Bandra-SEEPZ project is a part of the metro system which will connect Cuffe Parade business district in south Mumbai to SEEPZ in the north-central suburb. 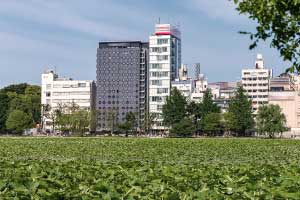