[ecis2016.org] The Supreme Court has agreed to hear a plea from IDBI Bank, seeking modification of the court’s earlier order that stayed insolvency proceedings against real estate firm Jaypee Infratech, while home buyers remain opposed to any lifting of the stay

The Supreme Court, on September 5, 2017, agreed to hear IDBI Bank’s plea, seeking modification of its order staying insolvency proceedings against embattled real estate firm Jaypee Infratech, on September 11. A bench comprising chief justice Dipak Misra and justices Amitava Roy and AM Khanwilkar, considered the submission of the bank that staying the order of the National Company Law Tribunal (NCLT) in Allahabad, had reversed the position and as a consequence, the company had gone back to a position of defaulting promoters.

You are reading: IDBI moves SC against stay of insolvency proceedings against Jaypee Infratech

Senior advocate AM Singhvi, appearing for the bank, said the Jaypee Group was in charge of the company again, because of the apex court order on September 4, 2017. The bank’s money is also public money and we are seeking modification of that order, he said. Senior advocate Ajit Sinha, appearing for one of the home buyers, vehemently opposed the contention of the bank and said home buyers were happy because of the apex court order, which need not be changed.

Read also : All about Chhattisgarh Housing Board (CGHB)

The top court had, on September 4, 2017, stayed insolvency proceedings against Jaypee Infratech at the NCLT, on a plea by some home buyers, who have neither got homes nor their money back and are seeking protection of their interest.

Flat buyers, under the Insolvency and Bankruptcy Code of 2016, do not fall in the category of secured creditors like banks and hence, can get back their money only if something is left after repaying the secured and operational creditors, one of the pleas filed by some home buyers said. The buyers had contended that around Rs 25,000 crores worth of money of flat buyers and others had been at stake and the insolvency proceedings were initiated ‘for a petty sum of Rs 500 crores’. The NCLT at Allahabad had initiated the insolvency proceedings against Jaypee Infratech, based on IDBI’s charge that the company had defaulted on loan repayment.

The home buyers, in the plea, referred to the provisions of the code and the order passed by the Allahabad bench of the NCLT and said that even decrees, passed by civil courts and consumer fora, in their favour cannot be executed, once insolvency proceedings begin. The PIL also said a direction may be issued to the government that flat owners/buyers be declared as secured creditors, like banks and FIs.

Around 32,000 buyers have booked their homes in 27 different housing projects of Jaypee Infratech and have been ‘left in the lurch, as the insolvency proceedings have been started against it’, the plea said. Hundreds of home buyers have been left in the lurch after the NCLT, on August 10, 2017, admitted IDBI Bank’s plea to initiate insolvency proceedings against the debt-ridden realty company, for defaulting on a Rs 526-crore loan, the plea said. Jaypee Infratech is into road construction and real estate business. It constructed the Yamuna Expressway, connecting Delhi and Agra. 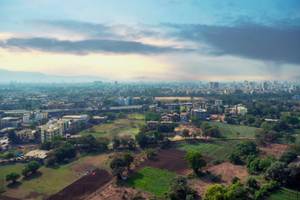 Panvel: Planned development and infrastructure make it a realty hotspot