[ecis2016.org] The union cabinet, chaired by prime minister Narendra Modi, has cleared a major suburban rail link project worth over Rs 10,000 crores, as part of the ambitious urban transport project in Mumbai

The union cabinet, on November 30, 2016, approved the Mumbai Urban Transport Project (MUTP) Phase-III. The estimated cost of the project is Rs 8,679 crores, with a completion cost of Rs 10,947 crores. The project is expected to be completed in the next five years, during the 13th Plan period.

You are reading: Mumbai’s lifeline – the railways, gets a Rs 10,000-crore boost

The project will involve construction of additional lines on Mumbai’s suburban rail network. To meet the demands of the ever-growing commuter traffic, a new suburban corridor between Panvel-Karjat (28-km route), a new elevated corridor between Airoli-Kalwa (3-km route), quadrupling of Virar-Dahanu Road (63-km route), procurement of 565 new coaches and trespass control measures in mid sections, have been included in MUTP- Phase III, a release said.

The Panvel-Karjat double line suburban corridor, will cater to the significant urbanisation and population growth in recent years in this area. This will also provide an alternate route from Karjat to CSTM via Panvel, which will be shorter by 23 kms than the existing route via Kalyan and will reduce travel time between CSTM to Karjat by 35 to 40 minutes by slow trains.

Presently, passengers commuting from Kalyan to Vashi/Panvel or in the reverse direction, have to get down at Thane and take the Trans-Harbour link. This results in congestion at Thane, which is already a busy station on the Central Railway. The Airoli-Kalwa corridor, will reduce congestion at Thane station and will also save time, as these passengers can travel bypassing Thane.

Procurement of new coaches will enhance the quality of service and reduce congestion. The works proposed under trespass control at 22 locations, will provide a safer travelling environment for the public. The areas covered by this project are Thane, Palghar, Raigad and Mumbai districts of Maharashtra.

The Mumbai suburban railway network on Central and Western Railways has a route length of 376 kms. There are five corridors – two on Western Railway, two on Central Railway and one on the Harbour Line of Central Railway. Everyday approximately eight million people travel in the suburban section, in more than 2,900 train services, resulting in severe overcrowding, especially during peak hours. 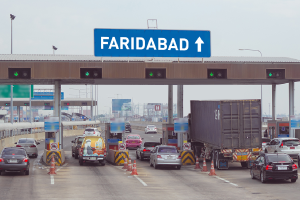